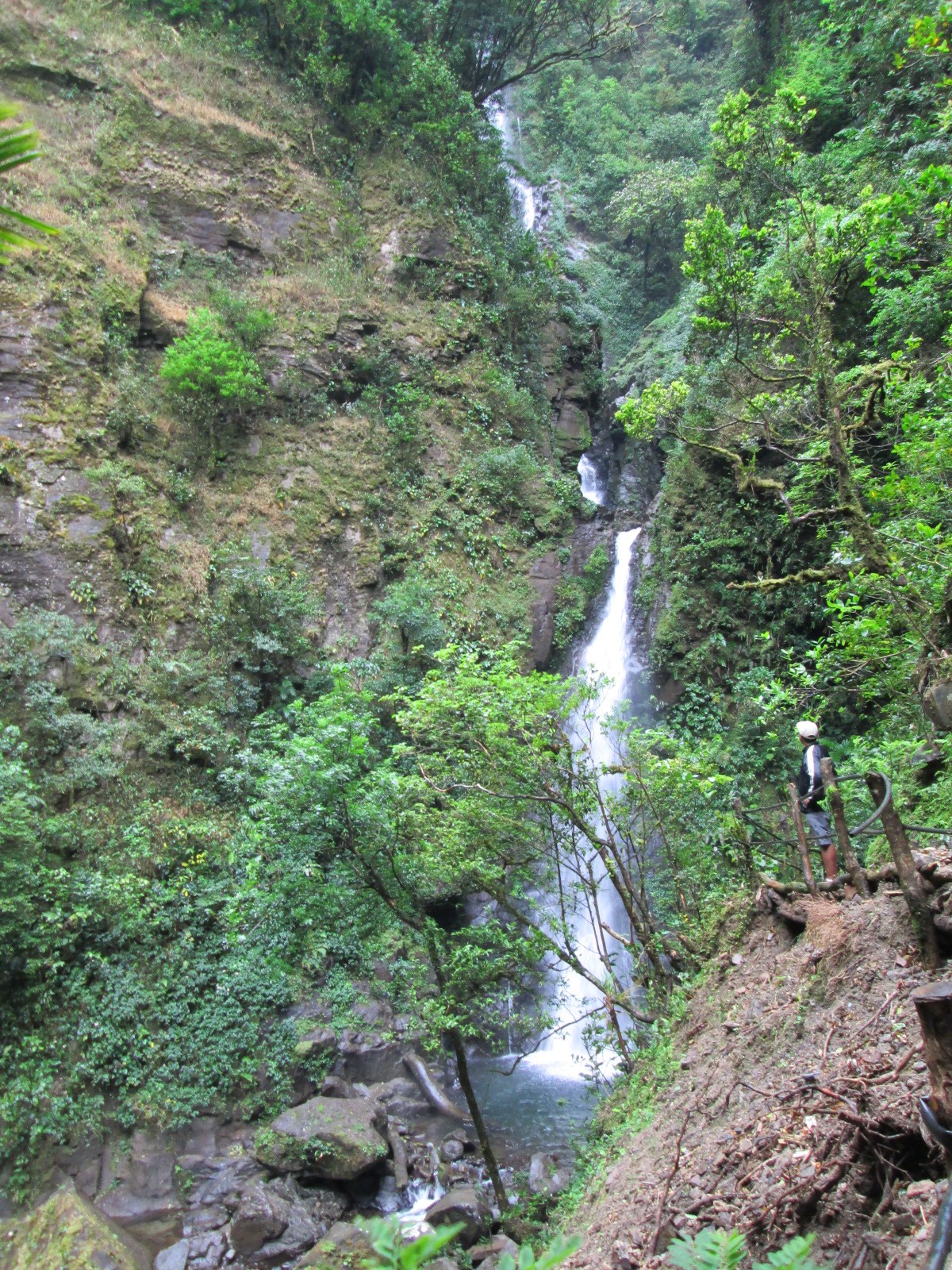 Spatially speaking, Central America is a small place. Yet, it is very dense both in population and ecology. Very narrow and split in half by high mountains, the two sides feature differing climates with differing flora and fauna. The divide is also cultural, with the Pacific side populated mostly by Spanish descendants while the Carribean coast is home to a black population which emigrated there as slaves or free men.

I have mixed feelings towards Costa Rica. While it has managed to retain its natural appeal, there is no denying that it has been irreversibly spoiled by tourism. Then again, I am part of the problem, going on a rant on how hordes of westerners (otherwise known as gringos) are such a nuisance to my travelling experience would amount to hypocrisy, but I cannot help but feel like a walking wallet in Costa Rica.

Thankfully, there are escape zones in the form of national parks, where for a moment, staring at absolutely majestic trees or spying on a couple of monkeys, you feel like you are witnessing what is most precious around here: Nature.

I started my time in this country by landing in San José, the capital. I only stayed a day and took a bus to Monteverde, where I met with friends from back home for a couple of days of hiking, some ziplining and one bungee jump. Came back to San José where I remained for a few days. Not that the city is great, one afternoon is enough to tour it, there is not a whole lot to do, but I was helping a friend fix his motorcycle and also really liked the hostel I was at (and to which I came back). As a token of appreciation, he took me to the top of Irazù volcano on his bike where, a good hour ahead of the tourist buses, we got to enjoy this gorgeous landscape by ourselves.

More and more I am realizing that there is no such thing as a bad place. Your first impressions are very much governed by how pretty/safe/cheap/culturally rich a city is, that is a fact, but what will make the most difference are the people you will meet. There is fun to be had anywhere on this planet and in San José, I was blessed with the companionship of a motorcycling driving crazy stand-up comedian dutch guy and a swiss-german lady that is still a mystery to me.

So along with those two I headed to Puerto Viejo de Talamanca where for four days we chilled at the beach or in the hostel, listening to the rain on the tin roof and the sounds of the jungle. The motorcyclist still had problems with his machine but having given him all the emotional support I could, I crossed the border over to Costa Rica’s southern neighbor, Panama, in order to go explore an archipelago called Bocas del Toro.

Everybody knows Panama because of its famous canal, but prior to travelling there, I knewnothing about this country. Very much like Costa Rica when it comes to architecture, cars, fast food joints and big bucks stores my experience in Panama was totally different from my two previous weeks in Costa Rica. Panama sports nature as beautiful as in Costa Rica, but with most Panameans living around their eponymous capital, the countryside feels empty. And with much less tourism going on, you get a break.

Going across the border was an interesting experience. I now know that crossings like the one I did are the norm around here, but for a moment, it was somewhat disorienting. You need a stamp out of the country you were in, you cross a derelict railroad bridge on foot, you get your visa for the country you are going to, you pay the entry fee and you are in. Simple, takes an hour, but there was a catch, I needed to show proof that I intended to travel out of the country. Normally, a plane ticket back home would have done the trick, but since I took a one-way flight, it had to choose between arguing in spanish with the custom agent that my travel insurrance validity period was proof enough or go buy a useless 15$ bus ticket that would take me back across the border into Costa Rica; thankfully, my spanish was convincing enough.

Then, one hour by bus and a boat to take from a “garbage strewn town” (Almirante as described by the Lonely Planet) was all that separated me from my next destination. Well, not quite because Bocas del Toro is many islands, and I was recommended not to stay on the main one but to go to Bastimentos instead, and that was another boat ride away. A great decision it was. Bastimentos might also have a bit of a waste management problem, but Old Bank, the largest village, is right along the idea most have of a laid-back carribean place. Inhabited by black people who speak Guari-guari (a Spanish-english creole), the only road is a cement walkway (a much welcome break from souped-up taxis, old trucs, and general lack of street crossings elsewhere), you get places by taxi-boat and everyone is just genuinely friendly.

You are still a tourist around here and it seems like their livelihood stems from that industry, but once you say no, the bothering and sales-pitching ends there, the dude sits with you at the table, lights up a joint, offers you some and strikes a conversation over village gossip . It could be their trick after all, because as you get friendly with the locals, you end up going on a tour with them anyway but seriously, what is there not to enjoy about a boat ride in the mangrove while listening to reggae, smoking some more, drinking beers and then going for a swim deep down in a cave with bats flying past you in the dark?

A Frenchman I met back in Costa Rica told me three lies are always told by everyone who sets foot in Bocas del Toro: that you are not going out tonight, that you are going out but only having one beer, and that you are leaving the next day, because you always end up sticking around longer.

Not only did I stay longer, but I ended up going back. The nearest beach from Old Bank was a 30 minutes walk in the jungle mud, but on arrival you were rewarded with you own private spot with no houses, boats, cars, nothing; just sand, palm trees and the odd pelican. The scuba diving was affordable and reefs were gorgeous. The hostel was one cool place and the local bars were frequented by like-minded travellers and locals. You fist bump everyone and within a couple days, they know your face and you know theirs, even the chinese corner store owner becomes nice to you.

I met with my cousin in Panama city, it was his spring break and had only a week to spend. There we saw the canal and climbed up mount Ancon to get a nice view of the city and we both felt that was it. Panama city looks like Miami without the beach (too polluted). Unlike any other central-american city, it is full of skyscrapers and hotels. The wealth disparity is immense between the districts and after short while we concluded that those high-rise luxury apartment building were just residences for fiscal evasion: all the lights are out at 21h00 and given the density the streets should be teeming with life.

So we quickly, we bought bus tickets back to Bocas del Toro where we did more muddy walks around the jungle, got invited to a locals house for beers visited that cave I wrote about a couple of paragraphs ago and did some diving. I could have seriously stayed  for longer but my cousin’s time was up. We took a bus across the country to David and bade farewell because my cousin’s time was up. I slept an extra night in David to get some work done during the day and then suffered through another border crossing into Costa Rica.

I should have made a stop in Corcovado national park to hike Costa Rica’s highest mountain, but climbing up peaks alone is not as fun, so I pressed on to Quepos, the gateway to Manuel Antonio national park.

The place is a bit of a joke. Manuel Antonio is the country’s smallest park yet it is the most visited. The coast line around is peppered with resorts. In the lineup to get inside the park (wtf a lineup?), I overheard people complaining about the waiting. Read you guide next time. The park is more like a beach/zoo combination than a conservation area. Meeting with monkeys is a certainty and they will be a meter away but that is because they’re after your snacks. Homo sapiens sapiens of all coulours and sizes are to be seen everywhere and if you are lucky, you might see a sloth or two through the binoculars of an over-expensive guide. I knew what to expect but even there, it was a disappointment.

Having not had enough of the pricey resort packed places apparently, I went to Jacò next. There at least the beach was nice and I was travelling with two girls from Québec, but the town itself was just a strip of surf shops an pricey restaurants. We spent a day hiking in and around Carrara national park, the one place in Costa Rica where the Scarlet Macaw is a common sight. We caught just a glimpse of them but definetly could hear their chicks: these birds are loud and just like Toucans, make a racket of guttural an unpleasant sounds normally assimilated to mammals. I did get to see one from up close in Monteverde because it had been tamed; beautiful creature. Outside the park was el puente de los cododrilos, or crocodile bridge, where, as its name implies, 20 or more of these massive reptiles can be seen basking in the sun or floating around at any given time.

While in San José over a few beers, I had the chance to meet with someone working for a sea-turtle grassroots conservation project (soon to be non-profit). His convincing argument was that everyone who got to enjoy a bit of Costa Rica’s nature ought to give back a bit of time to preserve it. Knowing I had all the time in world, I anouced him that within the coming weeks, I would come over to his village and help out for a while. My swiss friend made the same promise and found herself going there from Puerto-Viejo.

On my way out of Jacò back to San José, I sent this organization an e-mail stating that if they had a working internet connection, I would be glad to volunteer. Their answer took a while to come, but it was positive.

ASTOP (Associacion Salvemos Las Tortugas de Parismina) is the name of organisation and their goal is basically to protect their beach, a nesting ground for three species of sea turtles (Leatherback, Green and Hawksbill), from being poached. This practice used to be common place as those animals provided both a source of food and income (sea turtle eggs are thougt to have aphrodisiac properties), but now being critically endangered, there is an ongoing conservation effort to protect what little remains of their once widespread populations.

Volunteering over there consists mostly of patrolling the beaches at night and gathering eggs to bring them to a guarded hatchery to prevent them from being poached. As I write those lines, I have already been on one patrol, but since this write-up is already very lengthy, I will leave this for a separate post.